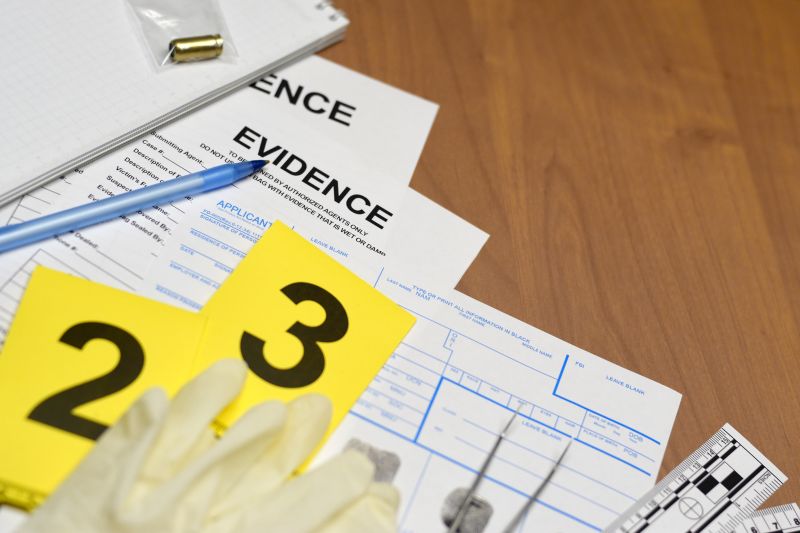 Evidence in a personal injury claim provides leverage to your case. Collecting all data pertaining to the motor vehicle collision is important and will benefit your settlement process. There are two types of evidence related to a personal injury claim. Physical Evidence and Non-Physical Evidence both are helpful to demonstrate to the jury the harm you have suffered and the costs you have endured.

Physical evidence refers to the visible and tangible evidence presented to the jury. This type of evidence is impactful by allowing the jury to see what occurred. There are various versions of physical evidence such as:

The nature and scope of the injuries caused by the incident can be demonstrated through physical evidence. Damage to an automobile can illustrate the intensity of an accident, or a shredding and stained piece of clothing. These examples can demonstrate the physical injuries from the accident more clearly than just a verbal statement.

Physical evidence that is not photographed or attained within the first few days of the incident may be lost, altered by time or weather, destroyed, or corrected. All physical evidence collected for your claim should be stored and preserved in the same environment as when the accident occurred.

This type of evidence can relate to objects that the jury can interact with directly, like a wrecked vehicle or a recovery scar. This allows the jury to have an understanding and a sense of the accident.

A great source of evidence is photos of the incident. This is the next best option if you do not have tangible proof to show the jury. Photos taken by a smartphone and/or digital/standard camera will suffice. The goal is to take several pictures from various perspectives to capture the details of the accident. You also will have a portfolio of images to choose from to best demonstrate to the insurance company the damage this accident has caused you. Filming the evidence is also an option.

How to Take Pictures for Personal Injury Claim Evidence

Publicly, you are allowed to take photographs; therefore, if your accident happened in a public area, then you may return to the site and take your photos legally.

Private and closed areas do not have the same guidelines as if the accident were to happen publicly. You must obtain permission from the property owner or a representative. For example:

While you were shopping at the mail, you slipped and fell, and was injured on site. After going home and your adrenaline settles, you decide to return to the mall to take photos. You must contact the mall owner or representative to gain access and approval to pass through the barriers in relation to your and fall. However, if they deny your request, follow these steps:

Components to Consider When Returning to the Accident Scene

Types of Non-Physical Evidence for Your Personal Injury Claim

Police Reports—The acknowledged true, authoritative, and unbiased account of the accident when the police file a report. If you were injured because of the motor vehicle collision, or another personal injury, then a police report can be used at your advantage.

Testimony—Refers to the information delivered by the witnesses on the stand. There are two types of testimonies. The first is an expert witness, who provides an expert opinion on the accident with their specialized experience in their field. The second is normal witness, who was at the accident scene and can explain their account of what happened.

Depositions—a pre-trial testimonial statements, outside of the courtroom, under oath without the benefit of cross-examination. Depositions are generally utilized before a trial to extract the facts of the case and are frequently reported.

Medical Bills—medical invoices, which reflect the costs and expenses regarding your accident, to prove the financial burden of hospital stays, prescription medicines, and visits to extended care facility.

Medical Records—only accessible by client, or with the permission of the attorney on behalf of the client. Medical records include factual and scientific data of the client’s injuries. These documents can explain in detail, the pain and suffering of the client due to the accident. X-rays and lab test results are examples of relevant medical documents.

When collecting evidence and data related to your accident, make sure to gather as much as possible. Not all evidence will be admissible in court. However, being ready with all the information for your attorney, will allow the attorney to determine what details that will be represented in the courtroom. To understand more, read our blog on the process of a personal injury claim.

What Do You Bring to Your Attorney?

If you have any photos or recordings of the incident, and/or any potential witnesses, then you can provide this information to your attorney so they can advance faster in the settlement process. However, majority of evidence is revealed during phases called Investigation and Discovery, but any input is important.

Your attorney or a professional private investigator can permit an investigation. They are available to examine the facts of the case, which are entered in the court record. Sometimes, a brief admissibility hearing during this period is required to determine if the evidence will be considered in court.

Discovery refers to the procedure in which the defense and plaintiff share their evidence and legal tactics before proceeding to the courtroom. This is as time where you and your attorney can evaluate the case’s evidence and properly prepare for trial.

If you or someone you love has been injured due to someone else’s negligence, then you will need the qualified and experienced assistance of a personal injury attorney. You deserve medical attention and financial compensation for your injuries. Schedule with a WEIERLAW representative today to discover your next options.

How are personal injury settlements paid out?

Who Pays the Bills? Detailed overview of how your personal injury settlements are distributed. A…

Can I sue for emotional distress?

Emotional Distress in Injury Claims When dealing with someone else’s negligence, financial compensation for physical…